Team Gracie’s took a field trip to Grey Sail Brewing of Rhode Island on Thursday to learn more about this beautiful little brewery, located in Westerly. The lovely Jennifer Brinton, co-owner & multi-tasker extraordinaire, had a lot to say about this special place. Jen, and her husband, Alan had been dreaming about opening a brewery for over 15 years. Jen admits that it was her husband who first had the idea. “I didn’t really know much about beer. This was always Alan’s dream, and it was worth the wait.”

The two met working for a corporation in New Jersey, and put their plans on hold for more than a decade. A move to Rhode Island and 4 kids later, the dream finally came to fruition in the Autumn of 2010. By 2011, the building had been purchased, the renovation completed, the equipment installed and the beer brewed and distributed.

“Finding our home at 63 Canal Street came to be a big part of who we are. Built toward the end of the 1920s as The Westerly Macaroni Factory, grain once again courses through the building. We have been fortunate to meet many local residents who still recall the days of purchasing their fresh pasta here. After WWII, the United States Post Office ran their parcel service out of the building until 1989 when NAPA Auto Parts moved in. After their relocation in 2010 the building was once again available for purchase. On April 4, 2011, Grey Sail Brewing of Rhode Island moved in. After seven short months the renovation was complete and we brewed the first batch of Flagship Ale on 11.11.11.”

The brewery is cozy & humid. It smells like a warm bread basket. Condensation drips down the insides of the windows and steam wafts throughout. We started our morning off with an ice cold glass of Grey Sail’s signature Flagship Ale…  Flagship is a golden-colored cream ale, brewed in a similar manner to the crisp lagers of continental Europe, offering great balance between malty sweetness and noble hop bitterness. This gold-medal winning cream ale is the perfect session beer for any occasion (like touring a brewery at 10am)!

Jen has put together quite an A-Team at Grey Sail, and beams with pride when introducing them. We spent some time with the brewer and assistant brewer dubbed: MONSIEUR JOSH LETOURNEAU | Head Brewer and Yeast Wrangler FRAU MICHELLE KIRMS | Assistant to the Brewer and Computer Goddess

Michelle brought us down to the main floor to see where the magic happens. 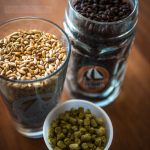 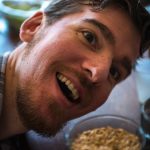 Give a man a beer, waste an hour. Teach a man to brew, and waste a lifetime! 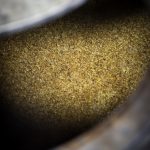 Inside the Mash Tun | The mash in progress! 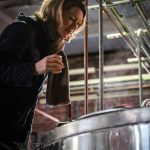 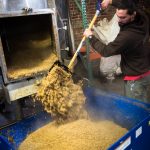 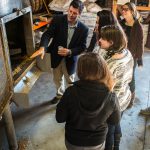 Dennis and his love of beer | The grates at the bottom of the mash tun prevent the malted barley from getting through. 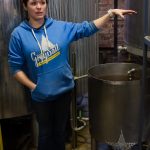 Assistant Brewer Michelle | The raw beer goes from the brew kettle to the fermenting tank. 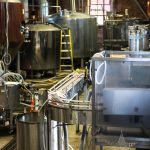 Their equipment is spotless. Cleanliness is extremely important to the brewing process. 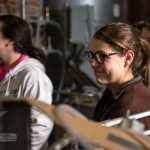 A taste of un-filtered beer, straight out of the fermenting tank. 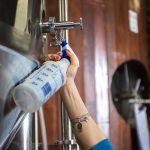 Even the smallest amount of unwanted bacteria or yeast can ruin an entire batch of beer. 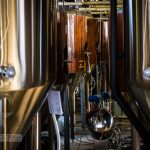 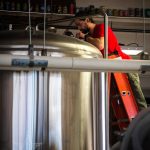 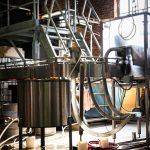 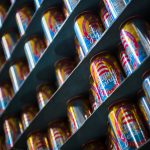 These cans are all shrinked wrapped by hand!

We are so excited to be featuring this amazing beer at our beer dinner on Thursday, January 23, 2014. Come and join us!

Thanks so much to our friends at Grey Sail!